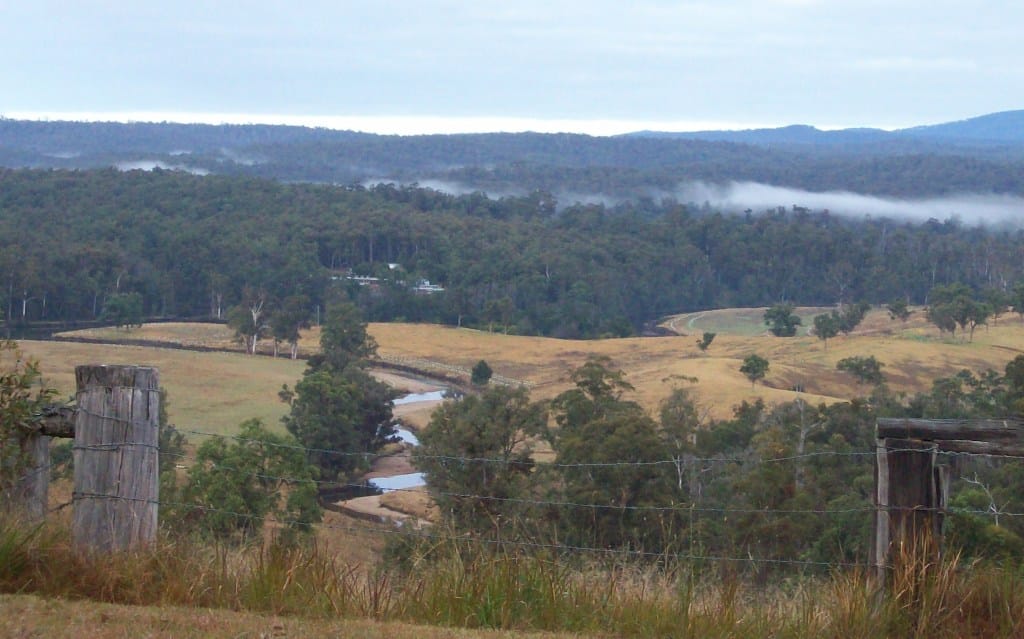 Young people at The Crossing have planted 22,000 trees for Landcare since 2011. These plantings link the coastal national parks of Gulaga and Biamanga and improve the quality of the Bermagui river for oyster growers downstream.

The Crossing is a member of the  Far South Coast Landcare Association. Our Landcare and conservation work is supported by Local Land Services, Bega Valley Shire Council, the Australian Government, the Weiland family who own the “Woodville” property opposite The Crossing.

The founders of the Crossing, Dean and Annette Turner, have received a Far South Coast Landcare Association Award for their Landcare and conservation work with young people.  Their Golden Wombat award is ‘in recognition of outstanding leadership and commitment to educating young people and the community‘.

Connecting and surveying habitat to protect threatened species are key aims of The Trust.  Sustainability and environmental education for young people is a feature of every program at the Crossing.

The Crossing property is permanently protected by a Voluntary Conservation Agreement with NSW National Parks and Wildlife Service.  The agreement was established in 2006 and applies to over 90 percent of the property. All threatened species listed for the region have been sighted or heard on the property.

From the start of December to the end of May each year, the Crossing is also available for Family Camp bookings.

Learn more about  ‘Permaculture in the Bush’ and our  Airb&b

The Crossing works with National Parks and Wildlife (Office of Environment and Heritage) on the biggest koala habitat survey in Australia. The project started in 2005.  The koalas between The Crossing and Tathra are the only known coastal NSW population south of Sydney.

The Wilderness Coast koalas have a unique genotype. Protecting and linking their habitat improves the chances of koalas connecting with remaining populations to the north and south.

Alistair Mezler, Uni of Central Queensland, evidence to Senate Inquiry, May 2011:
…..'(these) koalas are probably the most critical population in Australia in the sense that they may represent one of only two reservoirs, very small ones, of what is the native genotype of all of the Victorian and South Australian animals left.’

The Crossing’s habitat survey work has contributed to the government’s 2022 announcement that Koalas are on the endangered specie list and eligivle for further protection. Our work has also provided new insights on threatened species disturbance, climate change and ecology.

Young people have helped survey more than 250 square kilometres of forest to show where koala territories are, how few remain and what trees species are important to koalas on the Wilderness Coast.

Survey and Landcare support for surrounding farms has linked and enhanced habitat between the major coastal national parks on either side of The Crossing. The camp property and surrounds support many endangered and vulnerable species listed on Schedules 1 and 2 of the Threatened Species Conservation Act 1995.

The most important trees for koalas on the Wilderness Coast are:

The Crossing continues to involve young people in Habitat Survey as a core part of our programs.

Woollybutt (E. ), Monkey Gum (E. ), White Stringybark (E. gIoboidea) and Coastal Grey Box (E.bosistoana) are preferred koala browse species in the area. These species are present on the property, though in small numbers. Yertchuck (E. ) is also a food source and large numbers of this species are present on the property. Ribbon or Manna Gum (E. ) is also considered a primary koala feed tree; but only when growing on fertile soils. This species along with Blue Gum (E.maidenii) has been recorded on the creek bank soils.

In the forest, the young age of some trees limits the availability of large hollows for the larger possums and gliders, such as the greater glider (Petaurus ). However, large hollow-dependent animals such as the glossy tailed black cockatoo have been seen feeding on the property and a family of yellow-bellied gliders (Petaurus australis) are present as well as the common brushtail possum (Trichosurus vulpecula).

Smaller hollow-using species such as sugar gliders (Petaurus ) and feather-tailed gliders (Acrobates ) have also been recorded on the property, and the value of the forest to hollow-dependent species is improving with time. Small hollows in younger trees and fire-damaged trees are valuable for the many insectivorous bats present in the forest.  flying foxes have also been seen on the property.

On the river there are a few large old grey and blue box which appear to have escaped the original clearing of the Property, and these may carry hollows of use to larger species of possums and gliders such as the greater glider.  Grey kangaroos also use the flats and swamp wallabies are seen at the edges of the forest grazing on shrubs near the education .

Most of these animals including a range of owls have been seen and heard at night as they are nocturnal.

We are approved on the Australian Register of Environmental Organisations. This is our tax deductible, public fund:

Want to hear about upcoming camps?Sign up for the Crossing newsletter

By entering your details here you will receive updates about camps and other fun activities at the Crossing Land.

Thanks for joining the Crossing Land tribe. See you soon.

We hate spam and will never share your information with other companies. We send irregular and information based emails - not spammy ones.